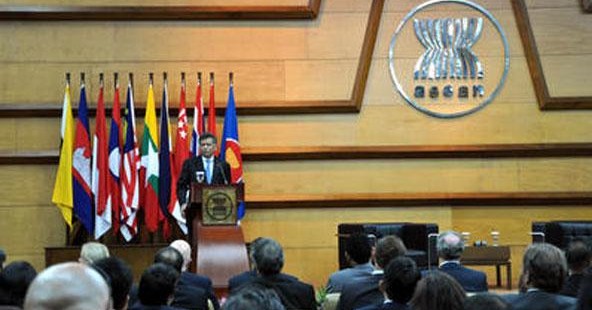 INCHEON, South Korea—Whoever wins the presidential election this week will have to acknowledge that the Asia we forgot about when we started our wars in Afghanistan and Iraq a decade ago is no longer there. The Asia we now purport to lead in our new “Pacific century” is far, far along in a process of regional integration that leaves a much-reduced place for America.

It would be hard to exaggerate this historic shift—or its likely impact on trade, investment, security, defense strategies, and so on. Back in the day, Asia was overwhelmingly dependent on U.S. markets and U.S. investment to fuel its export-led growth. When America sneezes, Asia catches cold—you heard this all the time at the far end of the Pacific. By way of sheer size, the U.S. economy overshadowed every nation in the region, including China.

Now, some 53 percent of Asia’s trade is currently within the region, according to an analysis just published in Foreign Policy, and this proportion is set to grow every year as Asia becomes self-propelling consumer economy — one that is currently worth $19 trillion a year. Nations that so recently fed off of others have made themselves a global growth engine.

“Our trade and investment in Asia continues to grow in absolute terms. That’s not the problem,” says Robert A. Manning, co-author with Evan A. Feigenbaum of the Foreign Policy analysis. “But it’s getting smaller as a proportion of Asia’s total trade—including intra-Asian trade. And that’s not a problem so much as an inevitability.”

More than all the numbers, what is striking when one travels in the region is how consciously Asians are building their own institutions to reflect an Asian identity. A conference here this week, the Asia Economic Community Forum, is considered the “Asian Davos.” There are few Americans present—and no U.S. officials. (Full disclosure: I am one of two American speakers.) The theme of the gathering is exactly what you would expect: forming a single economic unit to draw together dozens of disparate nations to speak as one.

Here is a curious sign of the times. On November 18–20 the annual East Asia Summit will convene in Cambodia. U.S. presidents routinely attend this event, but this year there is a twist. The summit is expected to launch a Regional  Comprehensive Economic Partnership,  the U.S. and other developed countries are not invited.

As the RCEP holds its inaugural meeting, the next American president, whoever it may be, will be asked to wait in the corridor along with Russian President Vladimir Putin.  That tells you what you need to know about America’s place in 21st century Asia.

Are we going to get squeezed out of the region’s economic dynamism? No, but the rules governing trade will no longer be exclusively ours. Are we going to forfeit our role as keeper of the peace in the Pacific? Probably, and this we should welcome. The only reason Asians would need American force in the western Pacific is to counter an aggressive China, and no one wants an aggressive China. (We are, in addition, unlikely to see one.)

It is now exactly a year since Secretary of State Hillary Clinton, in another Foreign Policy essay, declared “America’s Pacific Century.” Shortly thereafter came the now-familiar notion of Washington’s “pivot” from the Middle East to Asia—Asia from India to Japan.

A LAST CENTURY MODEL
On the security side, Washington is hopelessly lost in the past—fighting the last war, the Cold one. As it not so subtly seeks to surround the mainland, its security policy implicitly assumes a dangerous China. In time Washington’s antagonism will produce the very China the U.S. and the rest of Asia want to avoid. When Mrs. Clinton traveled to Beijingin September, she stressed that “after all, the Pacific is big enough for all of us.” What did the Chinese do? They extended a cordial official welcome and then let Xinhua, the state news agency, scold Washington to “stop its role as a sneaky troublemaker” between China and its neighbors.

It is true that Asia is currently beset with territorial disputes that have a nasty edge: China and Japan are arguing the Senkaku Islands (the Diaoyus in Chinese); Japan and South Korea both claim the Liancourt Rocks (Dokdo in Korean, Takeshima in Japanese). Further south lie the disputed Paracels and Spratleys. All of these are worthless bits of stone but for the resources that may lie under them and the national pride that attaches to them.

When the tries to referee these wrangles, our pronouncements always sound lame and beside-the-point—underscoring nothing so much as the limits of our influence in the emerging Asia. These disputes are reenactments of centuries of history, occupation, war, and cruelty. In a word they are Asian, and Washington cannot hope to play a significant role in finding resolutions. This is one reason Asians attach some urgency to the establishment of new Asian institutions—supra-national in scope, like the European Union.

Washington is falling down on trade, too. Its principal policy instrument is called the Trans-Pacific Partnership, or TTP, and it is intended to function as a basic building block in the making of a regional economic and trade architecture. It is not unlike a NAFTA on steroids, though it reflects all the complexities of any pact including so many signatories.

The problem is that it is hard to find any friends of the TTP on this end of the Pacific. The Chinese, of course, are certain that Washington is trying to encircle them economically—a trade and investment echo of U.S. security policy. The Japanese see it as leading to “the Americanization of their economy,” as a commentator recently put it. Most other Asians think similarly: The TTP, they argue, is intended to impose American-style neoliberalism on a region that does not necessarily buy into it.

There are any number of conventions, forums, summits, and conferences concerned with Asian unity these days. It is probably how it was in Europe during the late–1940s and 1950s, when what is now the EU was taking shape. It is unclear which will prove important in advancing the pan–Asian cause. What we can count on is the eclipse of the old Asia, wherein the U.S. enjoyed unchallenged primacy.

“The fundamental reality is that we’re a Pacific power, not an Asian power,” says Manning, who is a senior fellow at the Atlantic Council in Washington. “People here tend to confuse these two. And we can’t afford this mistake any longer.”

← Has Britain Recovered or Simply Faked a Recovery?
3 Foreign Hotspots that Will Test Obama’s Mettle →