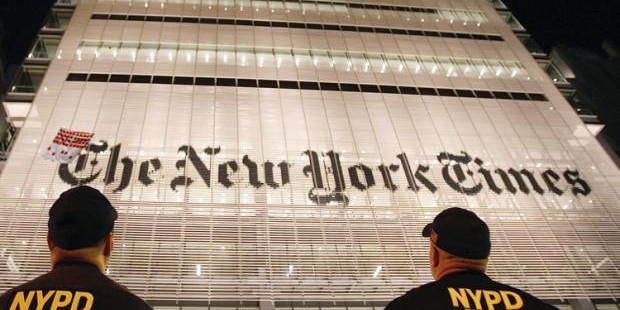 “A corrosive dereliction of duty”: Why the New York Times’ America-first journalism is so dangerous

Our foreign affairs columnist explains his problem with American exceptionalism, and with the New York Times

There are sanctions galore these days, this is for sure. More for the Russians this week, as readers will have noted. But the most important story bearing on Russia and how we ought to understand events in Ukraine has nothing directly to do with the all-but-shredded nation.

The New York Times and the Wall Street Journal reported this one identically. Their accounts are here and here. Russia and Iran, it seems, are negotiating a trade deal worth $8 billion to $10 billion, by which Russia would export 500 Mw of power to Iran and construct thermal and hydroelectric power plants and a related transmission network. No word yet as to whether this breaks the Western sanctions still in force against Iran.

This deal follows another, reported just a few weeks ago, that provides for Iran to trade 500,000 barrels of oil a day for Russian farm goods and manufactures. If consummated, the barter arrangement would be worth $20 billion. The Times tells us the Obama administration holds that this would violate sanctions, while the Journal says Treasury is uncertain on this point.

Now comes the Chinese dimension. Like a Wild West sheriff, Washington has just offered a “bounty” — the Journal’s term; where is Paladin? — worth $5 million for help in apprehending one Li Fangwei, a Chinese businessman accused of selling missile components to the Iranians. And whack: Eight trading companies Li is alleged to control now face sanctions.

Yet more. The Iranian National Oil Co. has just canceled a contract with the Chinese worth $2.5 billion. This deal was for Chinese help in developing a large oil field called South Azadegan. The Chinese, it seems, were driving too hard a bargain as they leveraged their role as a market and technology source to replace Western companies barred by sanctions from doing this kind of business.

But the take-home here is counterintuitive: While a deal goes south, it remains that China, Russia and other non-Western nations are doing an awful lot of what we used to call South-South trade.

How should we look upon all this? It is good context, surely, for the sanctions strategy Washington and the European capitals are piling onto Vladimir Putin’s Russia, not to mention those imposed on Iran years ago.

The Russia-Iran connection and the China-Iran connection are small, visible parts of something larger, as I see it. Here is the thought in a nutshell: “The integration of the largest emerging economies into the world economy has been one of the most important positive developments of the past 20 years.”

This is from a writer named Jim O’Neill, a former chairman of the asset management bit of Goldman Sachs in London. O’Neill wrote in the Daily Telegraph. A considerate reader of this column sent in the piece via Business Insider.

I am with O’Neill as he describes the rise of non-Western powers as positive. In the longest view, this is simply the overdue redress of a regrettable history of inequity in process. Closer to the ground, we witness a decline in the West’s ability to shape events to its liking. Non-Western nations now stand as alternative markets and sources of political and diplomatic support. This is our new reality, and as new realities go, it is big.

A couple of points worth making here. Most immediately, there is the matter of sanctions.

There can be little question of the power of sanctions to inflict pain — even if, as most of the time, innocent people are the ones to take the hit. But as a 21st century strategy — which is how sanctions are often advertised — I do not see it. They are a dwindling asset. They can work in the service of what is bold-faced right — watch the “boycott, divestment, sanctions” movement, BDS, now that Israel has broken off peace talks — but not in cases of political revenge and war by other means, as in Ukraine.

Equally, sanctions-happy nations can no longer afford their own enthusiasm anyway. In the Russia case, the gingerly approach — on the part of Americans as well as Europeans — is almost cringe-making given the distance between rhetoric and reality. In the Iran case, the Europeans now fill the flights to Tehran in anticipation of the business to be had if a deal on the Iranian nuclear program comes through. And in both cases, the non-Western route around sanctions grows more apparent.

The larger point is that our world gets rounder by the day, contrary to the flat-earth thinking of a commentator or two. I cannot applaud more loudly. How much better can the community of nations address the planet’s problems with so many more of us contributing, and from multiple traditions — cultural, philosophical? Hardly anyone can argue that Western civ has cornered the market on worldly wisdom.

Here we Westerners, and notably we Americans, have to learn how to read things such that we can recognize our long-term interests are best served by the defeat of our immediate interests as customarily defined by those holding power.

What I describe is not new as in yesterday. I first noticed the phenomenon of diversifying power in practical contexts when following efforts to sanction Iran in, say, 2007 or so. The Chinese, the Russians, our dear friends the Indians — none was on board to push the International Atomic Energy Agency to isolate Iran. There were interests in each case, and there was — important, this — an evident sense of common, non-Western identity.

The International Herald Tribune, my paper at the time, would not publish a lengthy piece I filed on this topic. It was too contrary to the orthodoxy, which was a problem at the Trib instantly when  the New York Times took full ownership back in the early 2000s.

I have just tipped into two questions in need of addressing. Readers raise them more or less incessantly in the comment string that follows these columns, and I read the string carefully.

One, why does this guy pick on America and all it does so reliably? Two, why does he have it in for the Times?

They are good questions. I have been eager to answer them for some time, and this column seems right as the place to do so.
We have, in the case of Washington’s version of America, a problem of blindness and deafness. To an extent that often astonishes, the American leadership is incapable of seeing a world amid fundamental, historic-scale flux, and incapable of hearing others as they speak to us of this flux.

There is an addiction to dominance. There is an apparently unbudging refusal to accept that the American century was an interim destined always to come to an end. The inheritance of providential thinking causes American leaders to assume that power once accrued is power without end.

My argument is simple. The American century did not, on balance and by a long way, become us, and it is time to resume the effort to live up to founding ideals in a way that Americans managed only very briefly, if ever they did, after the war of independence. The ideals remain, the best thing Americans ever gave humanity. They remain unmet, too.

No question of declinism here. But we need to fall before we rise — to surrender some fundamental assumptions. As I put it in a previous column, this requires we see the optimism within the apparent pessimism.

David Brooks, the conservative Times columnist, took up aspects of this very question in a piece published Tuesday . He asked some Yale professors why everything was haywire more or less everywhere — why “the fabric of peace and order is fraying.” (This means the peace and order of the American century, and if you can identify any in the 103 years to 2001, please use the comment box to tell us all what Brooks might mean.)

The thesis is captured in one pithy reply, from a professor named Charles Hill, a former State Department man. I will let the passage speak for itself:

The “category error” of our experts is to tell us that our system is doing just fine and proceeding on its eternal course toward ever-greater progress and global goodness. This is whistling past the graveyard. The lesson-category within grand strategic history is that when an established international system enters its phase of deterioration, many leaders nonetheless respond with insouciance, obliviousness, and self-congratulation. When the wolves of the world sense this, they, of course, will begin to make their moves to probe the ambiguities of the aging system and pick off choice pieces to devour at their leisure.

The assumption that the world beyond our shores crawls with wolves is a bit of paranoia as old as America — tragically self-fulfilling most of the time. Setting this aside, Hill accurately explains my thought of blindness and deafness. This is what has to fail of its own exhaustion if we are to do well in the new century.

Now about that newspaper on Eighth Avenue in Manhattan, Brooks’ newspaper.

My problem with the Times comes in two parts. I have the objections of a reader and then of a practitioner of the craft. I consider both kinds legitimate.

In the former category, I do not want an American rendition of Pravda. I object to a newspaper run by people who are Americans before they are journalists — people who fail to see that the best way to be American in their shoes is to be good journalists. I posit no golden age of brilliantly principled newspapering, but things have got greatly worse in recent years.

My thesis here: American media caved very big and deep during the Cold War, frightened to their bones, and they have never recovered the ground surrendered.

As a craftsman, the intellectual corruption and the juvenile scurrying in defense of one’s little patch of security is … let us cool down and say disheartening. I call it the phenomenon of the poisonous paycheck, slips of paper that cause recipients to perform all manner of unscrupulous things, all of them dictated by a remarkably intricate system of silent self-censorship.

It is not simply bad journalism. It is a corrosive dereliction of duty in a society aspiring to democratic process. Journalism is a pole of power in a healthy polity. The ire you read of many weeks in this space reflects my insistence that independence of mind cannot be put aside as our media so plainly have done.

← For Israel, a Victory That Will Prove Short-Lived
The Sanctions Against Russia Are a Dangerous Game →